Here’s a quick primer on using Script mode in Scrivener.

CAVEAT: I have zero experience writing screenplays–and unlike with the book, I don't have Keith and Ioa around to edit my blog posts–so I’m just going to give you the basics on how it works. Feel free to mock my example. In your head. 😉

For a new project, I’d suggest choosing a screenplay template, which has things set up for you, including the compile settings. It also has a Screenplay Format document at the top of the Binder that explains how to use it.

If you're working in an existing file, to enter Script mode, go to Format→Scriptwriting→Script Mode-Screenplay (the Scriptwriting menu also has options for comic books, interviews, stage plays, and radio dramas). The Binder icon changes to a yellow, hole-punched document (at least if you have vision like a hawk), and the footer bar displays script elements and a menu. (NOTE: You may not be able see the yellow icon tint if you have binder icons tinted to match the Label setting.)

For existing documents that were created in regular writing mode, Script mode must be applied separately to each document. A little annoying maybe (though there’s an easy keyboard shortcut: Command+8 on the Mac and Ctrl+4 in Windows), but it means you can mix in regular documents with scripts in your Manuscript (or Screenplay) folder.

There are several ways to apply script elements. You can use the footer menu, or the Tab and Enter keys, or a combination of both.

When you’re in one of the Script modes, the footer bar in the Editor changes. The bottom right pop-up menu lets you choose the element to apply. The following are available when you're using the Screenplay script format: Scene Heading, Action, Character, Parenthetical, Dialogue, Transition, Shot, General Text, or General Text (Centered). 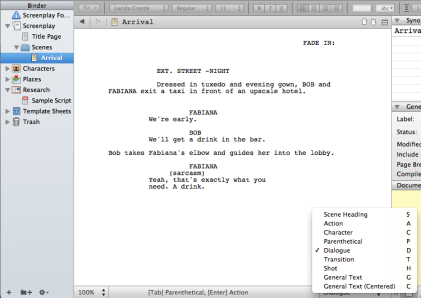 Notice that each element has a letter next to it. When you call up the elements menu, either by clicking it or using Shift+Command+Y (Ctrl+ \ in Windows), you can then press the associated letter on the keyboard to select the desired element.

Using the Function Key (Mac Only)

Once you have the element letters memorized (or you might want to print or write out a list), you can press the Function key and the letter at the same time to change to that script element, without having to call up the menu first.

Using the Tab and Enter Keys

The center of the footer shows which element will be created when you press either the Tab key or the Enter (Return) key. Generally, pressing Enter changes the next paragraph to the element that makes the most sense based on the line you’re currently writing.

You can import scripts (File→Import→Files) from Final Draft 8+ as an FCF file. For earlier versions of Final Draft, or for other scriptwriting programs, you can import the script as an RTF.

To change options, go to Format→Scriptwriting→Script Settings. From here you can create your own elements, edit or remove existing ones, and reorder them.

These settings are only saved to your current project unless you choose Manage→Save For Use With Other Projects.

You export through Compile just like with any Scrivener project, but Scrivener offers screenplay formats. If you created a project from a Scriptwriting template, the default compile settings are optimized for scripts.

For more on Script mode, a great place to start is the Scriptwriting chapter of the Scrivener Help manual.

Scrivener users with some experience might check out comic writer Antony Johnston's incredibly detailed discussion of his writing process in Scrivener. You might also see what you can find on the L&L forums. And if you’re involved with ScriptFrenzy, I believe they have a Scrivener forum.

Now go open a new project and play until you get comfortable with it. That's the best way to learn.